A special ceremony was hosted to unveil the book – titled ‘Transport Logistics: The Wheel of Commerce’ – with guests including Thai government officials, FIATA board members, lecturers and logisticians from 70 countries around the world. 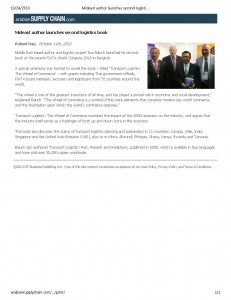 “The wheel is one of the greatest inventions of all time, and has played a pivotal role in economic and social development,” explained Baluch. “The wheel of commerce is a symbol of the many elements that comprise modern-day world commerce, and the foundation upon which the world’s commerce operates.”

Transport Logistics: The Wheel of Commerce examines the impact of the 2008 recession on the industry, and argues that the industry itself serves as a harbinger of both up and down turns in the economy.

Baluch also authored Transport Logistics: Past, Present and Predictions, published in 2005, which is available in four languages and have sold over 30,000 copies worldwide.

As published in www.arabiansupplychain.com, October 14, 2010